In early 1817, a letter was received at Marischal College in Aberdeen from the Scotch Presbyterian Church in Montreal, asking that a clergyman ordained in the Church of Scotland be sent to Canada to assist in the Montreal church, known popularly as the St. Gabriel Street Church.   The salary offered was £400, a goodly sum at the time.

The man chosen for the job was Henry Esson, born in 1793, son of a respected Aberdeenshire farmer. In 1807, he had entered Marischal College in Aberdeen, winning prizes for academic excellence and graduating in 1811.  He earned an MA.  He was ordained in the Church of Scotland in May 1817, arriving in Canada in the fall of 1817 at the age of 24.  After a few years, he replaced the incumbent minister, and in all remained  at the St. Gabriel Street Church for 27 years.

One of the intellectual leaders of Montreal, idealist, scholar and sparkling conversationalist, the Rev. Esson was not afraid of controversy.   He was a vocal proponent for recognition of the Presbyterian Church as an established church in Canada, in order to gain for the Presbyterians a share in the revenues from the extensive lands called Clergy Reserves that had been established in 1791 in Upper and Lower Canada.

Of major importance in the development of education in Canada were his efforts over a period of years against the continuation of McGill College as an exclusively Anglican preserve, and he stood up for the rights of the Church of Scotland to share in directing the schools in the province and in furnishing them with teachers.  The Rev. J. S. S. Armour, minister emeritus at Montreal’s  Church of St. Andrew and St. Paul, comments:  “Without Esson, there might have been no William Dawson at McGill nor, I think, the highly successful High School of Montreal.  The fact that both institutions were decidedly Scottish in outlook might also be to Esson’s credit.”

A school
One of Esson’s projects was the establishment in 1822 of the Montreal Academical Institution.  In this he was assisted between 1822 and 1827 by the Rev. Hugh Urquhart, and it became a successful private school catering mainly to the English-speaking Montreal establishment.  By the end of 1823, the school had 79 pupils, 58 of them studying the classics.  Among the pupils in the school were Henry Starnes who was mayor of Montreal in the 1850s; and Aaron Phillip Hart, who became a prominent lawyer. Another pupil for a time was Amédée Papineau, son of Louis -Joseph Papineau, who attended the school in 1828.  He notes in Souvenirs de jeunesse 1822-1837 that it was at the Esson school that he took his first lessons in French –studying Fenelon’s Télémaque. (Amédée had previously gone to Miss Waller’s school until she died.)

In 1829, Esson published  A sketch of the system of education and course of study pursued in the Montreal Academical Institution.  His school closed in 1832, the year of the first cholera epidemic and also of a controversial riot that was a precursor to the 1837-38 Rebellions.

Esson’s vision for the institute was formed by his sense of Canada’s need to progress into the future.   He perceived that the apprenticeship system was breaking down in Montreal as it was in Scotland and England, and that there was a resulting need to educate young Canadian-born workers, as well as the young immigrants flooding into Montreal.  At that time, there was no educational facility in Montreal where young men could learn the arithmetic, geometry and drawing skills needed to work effectively in the evolving building trades and in the newly emerging factories.

Henry Esson based his proposed model on ideas that had evolved in Scotland in the early 19th century and which had become formalized in the Mechanics’ Institute established in London in 1823.  He called a meeting at his home on November 21, 1828 to explore the idea of establishing a mechanics’ institute in Montreal, the first of its kind in Canada.  The goal of the proposed new organization would be “to instruct the members in the principles of the Arts and in the various branches of Science and useful knowledge.”  And he described how this goal would be achieved:
1. The voluntary association of mechanics and others and the payment of a small sum annually or half-yearly each.
2. Donations of money, books, specimens, implements, models, apparatus.
3. Library of reference and reading room.
4. Museum of machinery and models, minerals and natural history.
5. Academy or school for teaching arithmetic, algebra, geometry and trigonometry, and their different applications, particularly to perspective, architecture, mensuration and navigation, to which might be added ancient and modern language.
6. Lectures on natural and experimental philosophy, practical mechanics, astronomy, chemistry, civil history, political economy, philosophy of the human mind, literature and the arts.
7. An experimental workshop and laboratory.

Follow this link to read more articles on Major Events in Canadian History.

After several intervening meetings, Esson chaired a meeting on December 9, 1828, at which the constitution of the new organization was adopted, and a Committee of Management elected. As expressed in the documents s surrounding the development of the London Mechanics’ Institute, and in the Montreal institution’s constitution which also closely followed that of the London organization, the founding officers were leading citizens in the community who would provide preliminary funding and direction, but the actual running of the organization would be by men in the trades and professions. It was to be non-political and non-religious.

First president was the Swiss-born sheriff of Montreal, the Hon. Louis Gugy, who was a member of the Rev. Esson’s church, but whose family in Three Rivers [Trois-Rivières] were Anglicans.  Vice-presidents were Canadian-born lawyer and politician Louis-Joseph Papineau; American-born merchant Horatio Gates and English-born industrialist John Molson, both  former members of Rev Esson’s church;  and Esson.  Treasurer was builder/cabinetmaker William Shand, a member of St. Gabriel’s Church; and P. H. Ogilvy, teacher in the Rev. Esson’s school, was secretary.  In addition there were elected 32 committeemen representing a cross-section of trades and professions in the city.

On May 5, 1829, the Rev. Esson appears to have been thinking about adapting the original ideas that came from England to the realities of the situation in Montreal.  He suggested a discussion be held at the next meeting to seeking answers to “What are the peculiar advantages to be obtained from a Mechanics’ Institute in the existing state of society in this part of the world?”  Adaptations to the format and programs of the meetings were made often during the first months and years.

In one of the more bizarre happenings in his life, in 1936 he testified, along with architect John Ostell (a member of the Mechanics’ Institution and later president of the Mechanics’ Institute) and others, in front of Justice of the Peace Benjamin Holmes, against one Maria Monk, who had made salacious and sensational accusations against some Catholic clergy.  His statements helped debunk the story she had told in the booklet published as  “The Awful Disclosures of Maria Monk.”

The early 1800s had seen struggles between moderates and evangelicals in the Church of Scotland.  This division was mirrored within the St. Gabriel Street Church, where the moderates sided with Henry Esson; while the evangelicals—including early Mechanics’ Institution members Robert Armour, William Dow and John Redpath—favoured the second minister at St. Gabriel’s, the Rev. Edward Black  (who had arrived in Montreal in 1823). This evangelical group  separated from St. Gabriel’s and formed a new church.  A few years later there were more changing loyalties among the Presbyterians, not the least of which were Henry Esson becoming an evangelical Presbyterian shortly after his second marriage in 1842, and Edward Black becoming a traditionalist.

Toronto beckoned
The struggles among various factions within the Presbyterian community in Montreal led in 1844 to the Rev. Esson’s  departure for Toronto, where he  accepted an offer to teach history, literature and philosophy at what later became Knox College for the training of Presbyterian clergy.   While in Toronto he published  works including A Plain and Popular Exposition on the Principles of Voluntaryism (1849); and Strictures on the Present Method of Teaching the English Language and Suggestions for its Improvement (1852).  Sharon A. Rogers Hepburn, in her new book Crossing the Border, notes that, “Rev. Esson, a professor at Knox…possessed strong abolitionist sentiments.”

Family
The Rev. Esson was married first to Maria Sweeney, from a prominent and important Montreal family headed by Campbell Sweeney; she died in 1826 at the age of 24, and both their children died in infancy.  He married Elizabeth Campbell in 1842 before moving to Toronto.

Henry Esson died in Toronto in 1853 at age 60.  His friend George Brown, editor of the Globe and later a Father of Confederation, wrote, “He was a man of studious habits and of varied learning; of unquestionable logical powers and of fertile imagination; and into all that he did, he carried with him a noble enthusiasm, which enabled him to triumph over many obstacles…Of most agreeable manners and amiable temper, in his private life he was respected and beloved.”  The Rev. Principal Willis, DD, of Knox College said in a sermon, “Mr. Esson was one whom it was impossible to know and not to love.”

He is buried in Mount Royal Cemetery near his first wife and sons.

Acknowledgements:  With thanks to the Rev. J. S. S. Armour and the the Rev. Harry Kuntz for their assistance with this article.

Adapted from articles that appeared in Quebec Heritage News, November-December 2008; and in The Journal of the St. Andrew’s Society of Montreal, May 2009.

Some references:
Minutes of the Montreal Mechanics’ Institution 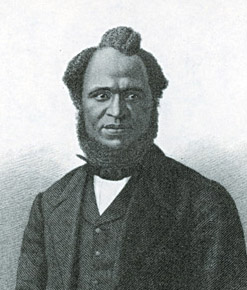